Before and After the villa

finds that illuminate other periods of occupation at the site 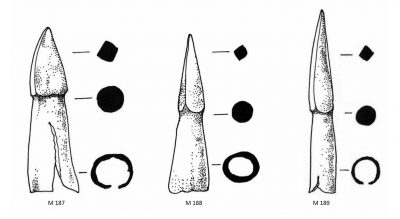 Among the metal implements found at Tel Anafa there are approximately 20 catapult bolt heads.[1] The bolts are forged of iron and vary in length from 7 cm to 8.8 cm for intact specimens. The bore for the shaft is consistently 1 cm, a necessity “since the wooden shaft had to fit closely into the firing groove of the catapult.”[2] It is this feature that allows catapult bolts to be distinguished from arrow and javelin points. Catapult bolts are found at sites dating to both the Hellenistic and Roman periods, and on the basis of form alone, those from Anafa could date to either of these periods at the site. The discovery of other militaria dating specifically to the Roman phase of occupation, however, suggests that these bolts also date to this time.

Catapult bolt heads were one component of siege machinery, and as such were an implement of warfare employed only by professional soldiers. Thus their discovery here indicates some kind of official military presence at the site, though as Gloria Merker points out, their discovery “in the central area of the tel rather than the perimeter,” and in insufficient numbers to indicate a siege,[3] suggests that they were likely held by the site’s occupants for defensive purposes rather than introduced by foreign adversaries. The lack of documentary or historical evidence for Roman legions in this area at this time might suggest that the soldiers who lived here were locals, or a mercenary group patched together, or retired Roman legionnaires. Merker proposes a detachment hired by Herod Phillip, whose capital at Caesarea Philippi lay just 13 km to the northeast. That city’s territory extended south to the site of Horvat Omrit, where a large Roman-style temple faced south to the Hula Valley. Tel Anafa lies just 3 km south of the Horvat Omrit temple, an ideal position to serve as an advance watch post for Caesarea Philippi.

This brass fibula is evidence of a connection to the Roman military. The fibula is of the Aucissa type which originated in Gaul (ca. 20 B.C.E).[1] Such fibulas are usually found on Roman military sites, particularly in Europe and in siege contexts in Syria-Palestine such as Masada and Gamla. The fibula was worn with the bow facing outwards so as to display the decorative row of dots. The iron pin secured clothing in place, and the catch plate on the end with its decorative knob protected the wearer from the pin. Elemental analysis shows that this fibula contained alloyed brass identical to contemporary Roman fibulas excavated from Masada, Gamla, and elsewhere in Europe.[2] This evidence, together with other Roman weaponry found at the site, reinforces the theory that in the early first century CE the site was occupied by soldiers, possibly mercenaries retired from imperial forces and now in the employ of Herod Philip, whose capital of Caesarea Philippi lay just up the road from Tel Anafa. 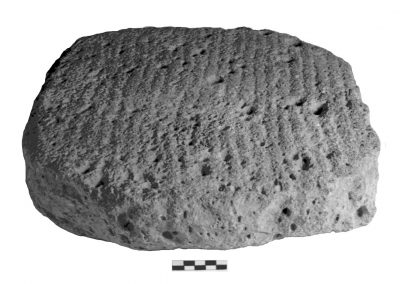 This grooved lower grinding stone was used to hand-mill grain.[1] For its ancient user, the grooves were a helpful feature: they facilitated milling by catching the raw kernels and holding them steady while a heavy upper stone was dragged back and forth, crushing the grain into flour. Those same grooves are also helpful to an archaeologist today: their nooks and crannies retain microscopic fossilized remains of phytoliths and starch granules, components embedded in the grain’s tissues and endosperm that can become fragmented and released in the action of milling.[2] Because phytoliths and starch granules can be distinguished by shape and size, which correlate to specific plant species, archaeologists can use them to help identify the type of grain people used to make their bread.[3]

This particular stone was not analyzed for residues, so we do not have direct evidence for the types of grains being milled at Tel Anafa. But we may get a clue from a study done at Tel Kedesh, a site located nearby on the plateau overlooking the Hula Valley on its western side. In the third century BCE, when this region was under the rule of the Ptolemaic empire of Egypt, there was a large administrative compound at Kedesh. Analyses done on two storage jars from the compound found that they had held Triticum aestivum (bread wheat), a strain known in Egyptian papyri as “Syrian wheat” and thought to have been cultivated experimentally by Ptolemy II Philadelphus, ruler of Egypt in the mid-third century BCE.[4]

At this same time, down in the valley, the small site of Tel Anafa housed a few poor farmsteads. It is likely that those living here worked under the auspices of Ptolemaic officials at Kedesh, growing and milling Triticum aestivum either for the direct benefit of those officials or for collection as tax revenue. Perhaps the farmers of Tel Anafa retained some of this special grain, using this grinding stone to turn it into loaves of bread for themselves and their families. 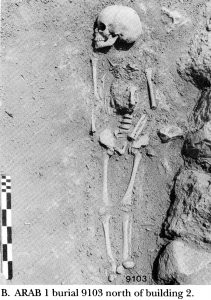 Neil Creveling, The last to live (and die) at Tel Anafa

In the uppermost layers at at Tel Anafa, in the center of the western edge of the site, there was a small cemetery with 22 bodies.[1] Fifteen of the skeletons (68%) were children, suggesting the presence of families living nearby. The number of burials cannot tell us how long the cemetery was in use, however, due to high child mortality. In all of the burials, heads were oriented towards the South or East, facing Mecca. Burial orientation is not always definitive evidence of Islamic burials; for example, in the cemetery at Tel Masaikh, in Syria, body orientation was typically Islamic, yet stratigraphic relationships and the presence of diagnostic material culture dated the finds to the Roman period or perhaps earlier.[2] At Tel Anafa, however, the stratigraphic position of this small cemetery above the Roman-era levels, and also above levels with early Medieval pottery, allow us to identify the site’s last settlement as, generally, Arab, dating anywhere from the 13th to possibly as late as the early 20th c. CE. 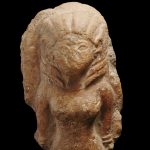 This figurine of a nude woman is a type of plaque figurine popular at sites in the northern part of what was Canaan in the Late Bronze Age (c. 1450-1200 BCE).[1] Her frontal pose is distinctive; figurines from the surrounding Syro-Mesopotamian region to the north and Egypt to the south tend to be more varied in gender, iconography, and representational style, sometimes holding plants or animals, and with arms extended and elbows bent making a V.[2] This figurine’s simple pose, with arms at her sides, make her enigmatic: is she a goddess, an attendant, an aide to ward off evil? Her elaborate wig, bracelets, and necklace are unusual and may suggest that she represented a special and even powerful personage to her owner. 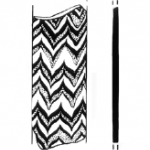 This fragment of a small core-formed glass alabastron dates from the late sixth through the fifth century BCE, which in this region of the Levant is known as the Persian period. Glass vessels like this were widely dispersed throughout the ancient Mediterranean and were used to store, transport, and exchange valued commodities, such as perfumes, cosmetics, and medicinal unguents.[1] Based on its form and style, scholars agree that this vessel was likely produced in Rhodes or a similar East Greek settlement in the Aegean. [2] Since there are no clearly identifiable Persian-period architectural remains at the site, this vessel and other datable items such as lamps and imported table vessels confirm that people indeed lived here – as well as telling us that the residents were linked via commodity exchange to other Mediterranean communities.[3] This makes sense, given that Tel Anafa sits in the shadow of what was at this time a large Tyrian administrative center at nearby Tel Kedesh, a regional hub that served as an agricultural depot and base for tax collecting.[4]